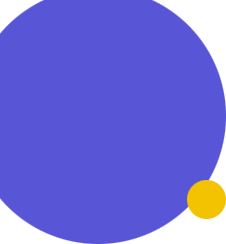 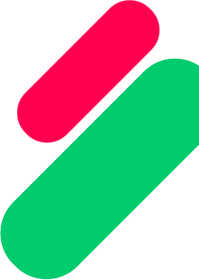 Deezer as one of the leading music streaming companies in the world, well-known in 180 countries worldwide offers its listeners more than 56 million songs and podcasts including radio stations and audiobooks offering a number of subscription services options that range from Free, Premium, Family and HiFi.

“Our strategy is focused on a ‘local hero’ approach and providing our users with an easy to use, accessible and comprehensive audio entertainment experience. We have a team of editors based all over the world that understand the different local music tastes. To add to that, we also provide one of the best algorithmic experiences in the industry for our users.” says Yoav Banai, Vice President of Customer Engagement.

Yoav’s first role was as a Director of Strategy and Operations at Deezer, in which he was responsible for managing several cross-departmental projects, which required a lot of collaboration and communication between teams. It was here that he first started to notice opportunities to improve the way different teams were working together.

“I remember trying to run and manage projects using Google Suite with Google Slides and Google Sheets. As we grew, our projects became more and more complex and, as a result, more and more complicated to manage. The more moving parts a project had, the longer it would take us to find the right information in the spreadsheets we were using,” says Yoav.

Yoav notes that these projects didn’t always have the visibility that was required to deliver results efficiently. It wasn't clear who knew what and when things had been or were going to be updated. It took time to understand the status of the various stages of a project, and the teams were not collaborating as efficiently as they could.

“I knew we had to find a way to make sure the technology worked for us and not the other way around.” says Yoav.

“Deciding to try monday.com wasn’t initially a company-level decision. We said we'll give it a try with one team and see how it goes. I then started working with the executive team, and they really took to it. The thing that resonated with our team was the ease of use and intuitive interface of monday.com’s Work OS’s.

Pretty quickly other teams wanted to be onboarded. More and more managers decided to move their teams to monday.com. Within a few months a significant proportion of the company was using monday.com to collaborate and track projects” says Yoav.

1. Increased transparency
2. A central workspace where you can find things easily
3. Significant improvement in collaboration
4. Eliminating tasks that require ‘no thinking’
5. Boost in efficiency

Since adopting monday.com, Yoav has been able to continually find new ways to improve the workflows and pipelines for his teams as his own roles and responsibilities grew.

Here are some of the main use cases:

When Yoav was Deezer’s Vice President of Partnerships, he created a partnership pipeline that brought together all business development teams from around the world.

“Having one pipeline for our biz dev teams helped them streamline the work with supporting teams like finance, legal, and label relations. It also helped us prioritize and analyze work globally and in one place instead of focusing on each region separately. As a result, our Time to Market for new deals has improved,” says Yoav. 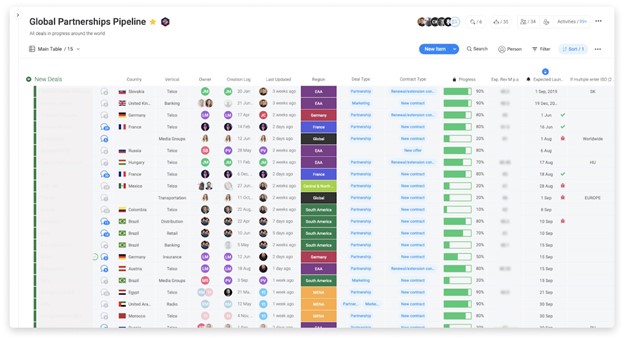 Another area that has benefited from a transition to monday.com is Deezer’s CRM. Deezer’s goal is to improve how relevant and targeted each CRM campaign is, in order to improve its relationship with its customers.

“The core of our CRM work is a conversation with our users about music. We send them music recommendations, notes from our editors and tips that are localized and personalized. Our goal is to make sure that our users see Deezer’s CRM as a fully viable, trustworthy and authentic source of inspiration and information when it comes to music and podcasts,” says Yoav.

The CRM team used to run on a software that had become outdated. Only the requester and executer could see what was going on. There was no real collaboration around these requests. Sometimes there’d be duplicates and sometimes there wouldn’t be very many requests, because it wasn’t a very engaging tool,” says Yoav. 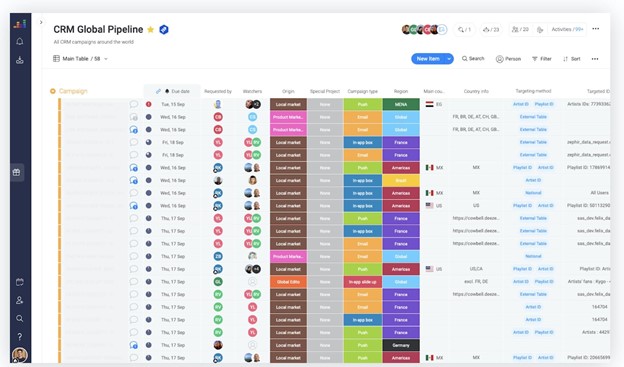 Because of this, when Yoav became the VP of Customer Engagement, he decided to integrate their old pipeline into the monday.com Work OS and slowly migrated everything over.

“When we moved everything over to monday.com the team immediately became much more engaged. People on my team started creating and requesting more and more campaigns. As a result, we nearly tripled the amount of our weekly campaigns, simply because it’s now easier and more intuitive to create campaign requests” says Yoav.

Thanks to a single centralized pipeline, everyone can see what is going on. The different teams can see what other teams are doing and they can collaborate more.

“We see a lot more collaboration and brainstorming between our different teams globally. Now our editorial team in Saudi Arabia can see the campaigns that our team in Istanbul or in Casablanca are sending out. As a result, they share more ideas and are better at inspiring each other,” says Yoav.

Yoav configured dashboards that allow Deezer to instantly see the results of what they're doing, test many more campaigns and iterate based on how their users react to those campaigns.

“After we switched our CRM workflow to monday.com, the streams that we’re generating from these campaigns grew by almost 500%. So our users are listening to much more music, finding new things to enjoy and engaging more with our campaigns. Now that’s music to our ears!” says Yoav. 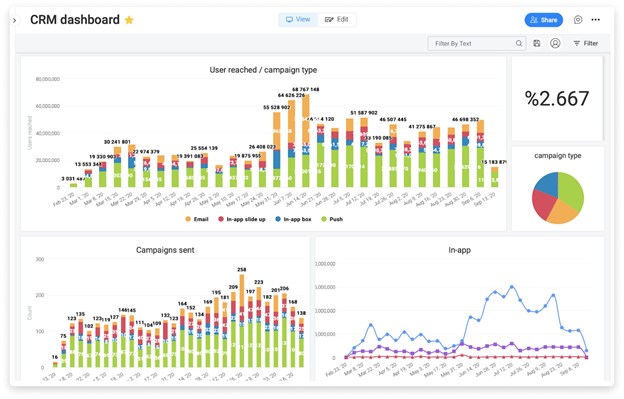